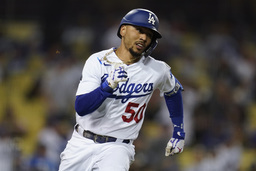 One team with its ticket just punched to the postseason will be visiting another struggling badly to hang on in the wild-card chase as the Los Angeles Dodgers visit the Cincinnati Reds on Friday night to open a three-game series.

The Dodgers (94-53) have won six straight and clinched a playoff berth Tuesday. In Wednesday's win, lefty Julio Urias became baseball's first 18-game winner in 2021. The win also ensured the Dodgers would host the NL wild-card game if they don't win the division.

The Giants lost their second straight to San Diego on Thursday, allowing the Dodgers, winners of the NL West for eight straight seasons, to pull within a game of division-leading San Francisco.

"That's our expectation, to win every day," Dodgers manager Dave Roberts said. "Those guys [the Giants] are playing great baseball, but we just have to keep winning baseball games. If we do that, it'll take care of itself."

"We just have to take care of us and continue to play good baseball," said Dodgers closer Kenley Jansen. "If we just worry about us, good things are going to happen. I think that when we do that, ain't nobody better than us in this league."

The Reds (76-71), meanwhile, have lost seven straight series since sweeping four games from the Marlins at Great American Ball Park in mid-August.

Cincinnati, which narrowly escaped Thursday with a 1-0 win in Pittsburgh, is just 7-14 in its last 21 games and has fallen a game back of St. Louis for the second wild-card spot, and one-half game back of San Diego.

"This team, they always work together, like a family," said Asdrubal Cabrera, who drove in the game's only run Thursday. "That's really important for a team that wants to be in the postseason. I know we had a tough week, but I still believe in this team."

"It was really important," added closer Mychal Givens, who stranded runners on first and third to end Thursday's win. "We needed this one to continue to play for a playoff spot. After a good outing by Tyler Mahle, we had to back him up, pass the baton and finish the game strong."

Right-hander Luis Castillo (7-15, 4.24 ERA) will start for the Reds, making his fourth career start against the Dodgers and his first in over two years. He last appeared against the Dodgers on April 15, 2019, allowing four hits, five walks and two runs over five innings. He did not get a decision as the Reds lost 4-3 at Dodger Stadium.

The right-hander bounced back from his rough outing in San Francisco - six earned runs and seven hits in three innings -- on Sept. 5 by holding the Padres to two runs on six hits in seven innings and picking up the win in the Dodgers' 5-4 victory on Saturday.

Buehler will be facing the Reds for the second time this year. On April 27, he allowed five runs over 6 1/3 innings but received a no-decision in Cincinnati's 6-5 win.

© 2021 by STATS PERFORM.
Any commercial use or distribution without the express written consent of STATS PERFROM is strictly prohibited.